I had always planned to write the next stage of our Japanese adventure today, and as it turns out, Okinawa is unfortunately already in the news.

Okinawa is a tiny island south-east of Japan and is often a key place for local holiday makers to head for some relaxation and sunshine – hence why we decided to treat ourselves and fly there for 4 days.

Please be warned though; as it has become clear from today’s events, May – August is rainy season in Okinawa and storms and typhoons can happen. Okinawa has today fallen victim to Typhoon Neoguri which has left two people dead and others injured according to the BBC. This is terrible news and I am thinking of all the lovely Japanese people we met and hoping they are all safe.

We also experienced a mix of weather during our stay but we were lucky to get some sunny spells too. I would definitely recommend flying out there. It took 2 hours from Osaka airport and on the way there we flew with Peach airlines and came back into Tokyo with Jet Star. It was roughly about £130 return each – a bit on the pricey side but well worth it for some peace and luxury.

We stayed at the 4* Sunmarina Hotel in Onna-Son which was about an hour’s drive on the bus from Naha airport. At around £100 a night it wasn’t exactly cheap, but compared to hotels in the UK for that price, it was a palace.

The lobby was lovely, with at least half of it made up of water with fish swimming in it. There was table tennis, a pool table, tennis courts and crazy golf. It was bang on the beach, had a lovely swimming pool and was near to some really gorgeous restaurants.

Our favourite restaurant was one we stumbled upon our first night. Coming out of the hotel and turning left, we walked away from the busier strip and came across Shige, an AMAZING Tapanyaki restaurant that can’t be beaten by any restaurant in Okinawa. Not even the number 1 rated (on Trip Advisor) Jam could beat it.

Strangely enough I cannot find this amazing restaurant on Trip Advisor anywhere, it is on my to-do list to add it on.

It is a family run restaurant, as we walked in the mother and her children scurried away out of sight (which was a shame) and we were left alone with the chef (dad). I was a bit dubious at first although we could see that some people had recently left as the tables were being cleared away.

We had a fantastic meal of scallops, steak and cocktails. The meat melted in your mouth and the chef, who was also our waiter, was very attentive and lovely, despite his English being limited and our Japanese even worse, we received everything we wanted. Total cost – about £25. For a beautiful meal that was very, very filling. The only disappointment was when we went back on our last night to find it was shut!

If you were put off Japan by rumours the country is very expensive, think again. We found very affordable, amazing places everywhere we went.

Whilst most of our days in Okinawa were spent eating or sunbathing we did also take a trip out on a boat to go snorkelling. Although we had had some sunny days the sea was freezing and I was very grateful of the wet suit I was given.

Of course nothing is ever simple for me and I did really struggle to get it on – much to the diving instructors amusement. There is nothing less undignified then standing in a bikini trying to pull on a wet suit that is just a tad too small for you. In front of the whole boat.

Why I didn’t think to take myself off into the changing rooms I do not know. However after much tugging from both the diving instructors and Howard, I finally managed to get the bloody thing on and was able to pose for a few rather unattractive photos. 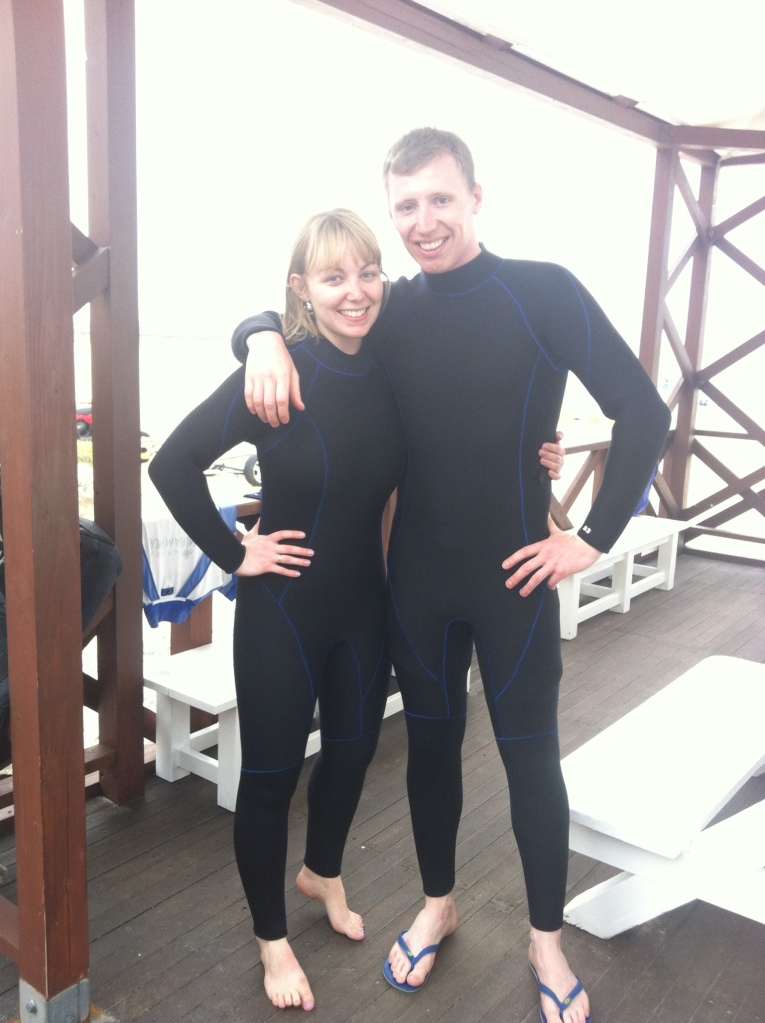 Have you ever been to Okinawa? What did you like best about it?